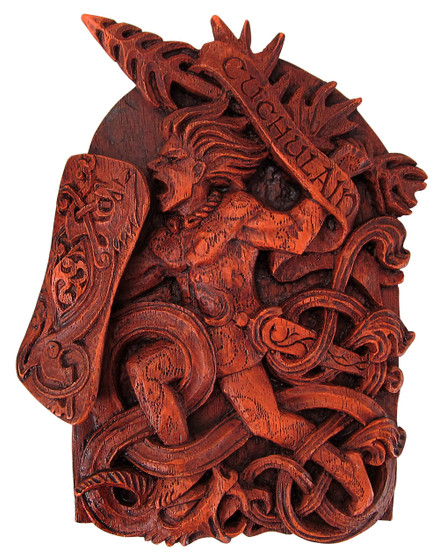 Cuchulain was an ancient warrior of the Red Branch in Ulster, Ireland. He was trained by the woman warrior Scathach. His original name was Setanta. He changed it to Cuchulain which means "hound of Chulain" as a "geis" or pledge after he killed Chulain's hunting dog. He was believed to be the son of the Sun God Lugh. In this particular image he is single-handedly fighting the warriors of his arch-enemy Queen Maeve of Connacht. Morrigan to assist in the battle becomes an eel and tries to trip him at the ford. Cuchulain wins anyway wounding the Morrigan terribly and later in the stories she tricks him into healing her. He is wielding Gae Bolg which was a great weapon taken from the body of a sea monster that had thirty-two barbs on it. He can be called on for strength, stamina, perseverance, protection and guidance in overcoming overwhelming odds.

Morrigan, translated as "Phantom Queen," is an aweso

Cernunnos, known as the Horned One,

Odin is known as the Norse All-Father.

Cerridwen, a Celtic Goddess, was known for creating a magical brew that was stirred for a year and a…

Morrigan, translated as "Phantom Queen," is an awesome Battle Goddess. Here she is depicted in one o…

Drawing Down The Moon Plaque

The Anglo-Saxon Goddess of Abundance and Prosperity, Habondia is descended from a Germanic Goddess o…

The Morrigan is depicted as a Bronze Age Celt. A triple Goddess, her three aspects are known as: Nem…

Cernunnos, known as the Horned One, is the antlered God of the Forest. His name is written in Theban…

Brigid, one of the most popular Celtic Goddesses is a vast deity and can assist her devotees with ne…

This image is based on a picture stone located in Gottland, Sweden. The Smiss Stone or the Snake-wit…

Thor is known in Norse mythology as the God of thunder, lightning, storms, strength, protection, oak…

Aradia, "Queen of the Witches," is believed to have been a real high-born woman who taught witchcraf…