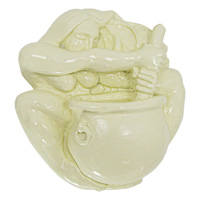 Though many Wiccans see her as a dark Goddess, Cerridwen, the first goddess I ever worked with, was introduced to me as the goddess of the full moon. To get to know her, I spent long wonderful evenings meditating on the full moon. During one of these sessions, with others present, I gazed at the full moon as its enormous shape rose over an open field. The image of the moon seemed to break into a rolling form, which assumed the shape of a woman stirring a great cauldron. She seemed strong and powerful and lost in her work. Her whole body moved and writhed in the slow rhythm of stirring. I saw this image for probably only a fraction of a second before, much to the annoyance of my company, I yelled, “somebody give me a pencil!”

The next day, I made a mess of things out at the wood pile as I looked for an appropriate piece of wood to carve what I saw. The resulting Cerridwen statue is, I think, one of my most inspired pieces. It doesn’t really look like it was carved by me, but by a different artist, using a very different style. The way people react to it is kind of unique as well. Either people don’t even notice the statue, or they practically throw themselves upon her and demand to take her home.--PB 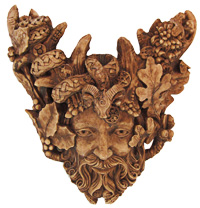 I wanted to create a benevolent father figure, so in preparing to carve this piece, I spent a lot of time talking with friends about their relationship to their fathers. Mostly, I asked them what they most wanted from their father. They all responded in their own ways, but what I heard every time was that they wanted their father­s approval. It was this feeling and expression that I tried to communicate in the carving.

Two different men posed for the image. I chose one because he was an extraordinary hunter, not just successful but honorable, careful and truly in love with the deer he hunted. The other man, a close friend, had the perfect whiskers and a metaphysical background.

I had great fun adding all sorts of signs and symbols to the image. On Samhain night I took the image to be consecrated. We set the carving up on the forest altar and with several others present the ritual was begun. When it came time to invoke Cernunnos, I stepped forward, holding a candle in a glass cup. All the other candles had gone out because it was a very windy night. Illuminating the face of the carving with my candle, I began to invoke the god. The invocation became like a call and response. As I called Cernunnos into the carving, I said, “I call you in by oak and stone,” and the coven responded, “Cernunnos we call you in.” I said, “I call you in by blood and bone,” and they responded again with, “Cernunnos we call you in.” When the chant reached its highest point I yelled, “thou art born!” At that very instant, a large moth flew into the candle I was holding, exploded in a flash of flames, and extinguished the candle leaving us in darkness.

The next day I made room for one more image on the carving. If you look carefully, you will find a moth hiding in the antlers. --PB 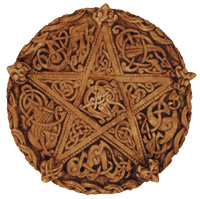 I never imagined this piece, which is loosely based on Anglo-Saxon brooches would generate such controversy. Yet I’m constantly called upon to settle arguments over the images depicted in it. Often someone will come to me insisting that they were correct in identifying one of the animals as a unicorn and not a dragon as their friend maintains. Usually, these involve bets of at least $10. Invariably, both parties are outraged when I told them I never intended the animals to have specific identities. They’re simply fantasy creatures meant to display the vitality of the pentagram. --PB 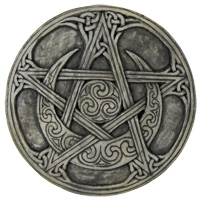 You asked about what the Moon Pentacle means to me. I certainly don’t have a short answer to that question. The symbol means a very great deal to me.

If I could choose just one aspect of the design that I find engaging it would be the balance between the Celtic knotwork and the spiral patterning. The knotwork on the pentagram with it’s interlocking lines, always alternating between going over and going under, feels masculine to me and therefore represents the God.  The crescent with the triform swirling spirals, smoothly interacting with each other yet never crossing each others boundaries, feels feminine to me and represents the Goddess.

Together, I feel that the two design styles represent the union of Goddess and God enjoined in the sacred marriage.

I carved this statue out of a little piece of clear alabaster after studying the old Paleolithic goddess statues and wanted to make one for myself. This may sound strange but what I most wanted was to have a Venus statue I could touch. To me, there is something about rubbing my thumbs over her belly and along her hips that feels like a kind of worship. Over the years I’ve heard that this statue has been used in all kinds of abundance spells. Iåve also heard several stories about women becoming pregnant even after doctors told them it was unlikely. I’ve also heard stories and I confess participated in a few that involved giving the Venus to women who were not trying to get pregnant and then they did conceive soon after receiving the statue. Perhaps the statue should come with a warning label on it: Warning! May cause extreme fertility and sudden pregnancy, especially in women! --PB 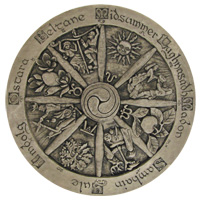 Wheel Of The Year, Large

Carving this piece taught me a great deal about the pagan holidays.  When I designed the wheel of the year, I made sure the equinoxes and solstices balanced each other aesthetically. However, I designed the cross quarter days of Samhain, Imbolg, Beltane and Lughnasadh were all designed separately. I didn’t really try to balance them or make them fit together in any way. I was well into carving the project when I realized how these four designs still connected with and balanced each other.

I carved Beltane first because that design seemed obvious, a man and a woman dancing the maypole. Carving Samhain proved much more difficult. Everything I came up with seemed like a cheesy ad for Halloween. Finally, I gave up and settled on an image that was relevant to me personally, ensuring that at least one person would be happy. The design depicts the symbolic marriage between the goddess Morrigan, represented by the cauldron and the Dagda, represented by the stang or forked staff; this is a union I always celebrate at Samhain. Okay, so a very Halloweeney Jack o’ Lantern still made it in there. What I didn’t expect was that when the Samhain image was placed opposite the Beltane image, the stang seemed to run right through the ground and come out on the other side as the Maypole, creating a sort of central axis through the earth. This was entirely unintentional.

Lughnasadh’s image, that of two figures holding up a loaf of bread to the rays of the sun, was simple to create. When placed opposite to the image of Imbolg, however, the sun’s rays seemed to run right through the center of the wheel and come out of the fire, illuminating two other figures holding up Bridget’s cross, which like the bread, is made of wheat. This balance was also unintentional.